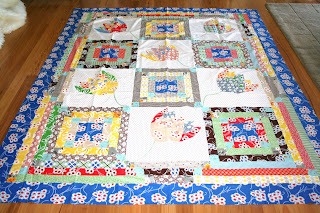 This is not the best photo in the world, but you get the general idea anyway. It's so hard to take photos of my quilts due to lack of a large enough space with good lighting. I decided to take some time out from baby sewing to do a bit of quilting again. Aaaah, it's nice to be working with some color. I got the pattern and fabric for this quilt at Material Obsession when we took our trip up to Sydney a little while back. The pattern is called Fanciful Flowers and it is one that is in their new book--although I only had a paper copy. The fabric line I used is called Katie Jump Rope by Denyse Schmidt with a little of her Flea Market Fancy line in there as well. I did add the final border to it because I really liked the blue flower fabric.

I finally sent off a couple of tops to the long armer as I don't quite know when I will be delving into buying a machine and starting my own long arming business at this point. The week I decided I was definitely going to go ahead with it was the same week I found out I was pregnant! So, I decided that maybe I would "wait and see" instead. It will be a real treat though to get a few quilts back and finish them off so they can start being used!

Talking about the baby, I can't remember now if I mentioned before that the baby was sitting Frank Breech when I had an ultrasound done at 32 weeks. Everytime since that time when I went to the doctor or midwife they couldn't tell me for sure if it had turned or not either. I tried everything I could to get it to turn--being upside down, playing music, light, acupuncture-moxabustion, chiropractor using the Webster technique and whatever else anyone told me might work. In the end I suspect that it may have been the chiropractor on the second visit that might have caused the baby to turn. The reason I think so is that after the second visit I felt very different to what I had been feeling previously although I couldn't say what in the world felt different. Maybe that it was easier to walk and move around suddenly. Still, I just got the official word from the ultrasound yesterday that the head is down and so I can sigh a breath of relief! The doctor was going to recommend sending me up to Canberra this week to do a manual version if it hadn't turned which we really didn't want to have to do. And I Really don't want to deliver by Cesarian either if I can help it either!

I am really getting excited now, I can't believe in a few short weeks we will have our baby! Life will never be the same again. It's all a bit scary really, but hopefully it will all be worth it. If not, too late now!
Posted by Jeannette Bruce at 11:49 AM

Well exciting days ahead for sure! I remember that each week before I had a baby I would start to get so much energy that the house would be spic and span and I was jumping with this new found energy. Well not exactly jumping, but you know what I mean.
I love this quilt. I cliked on to enlarge it. great great job you did with the colours
I love your "farm" and your photos give you a peaceful yet exciting existance.

beautiful quilt! you are going to have a wonderful, exciting new year.

Beautiful! I love KJR - It is one of my favorites. Best wishes with your pregnancy - not much longer now!

Hi there thought I'd pop in and say hi, sounds like all things are on the move for you now how exciting!! I am glad that the bub has moved for you and that all seems to be going well. Our little girl is now 3 months old and a real cutie. All the best for the delivery!! Love your quilt! Cheers Erica

your quilt is lovely~
i just wanted to comment and wish you the best of luck for the end of your pregnancy. enjoy everything.. the baby will be here soon~

What a beautiful quilt... my kinda colours and style!! Keep up the great work and good luck with your new baby!! Lx