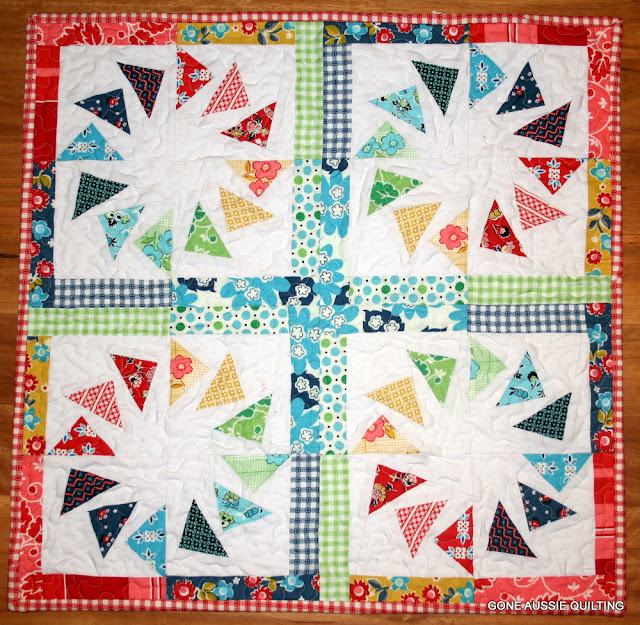 Since I have a lot of sewing commitments lately and a lot of things to do coming up soon:), I thought that I would work on some of my larger sewing commitments today.  Here is the finished quilt that I have made for the Denyse Schmidt Picnic and Fairgrounds Doll Quilt Swap.  I had a hard time deciding at the end how to do the layout for this.  Originally I wanted to make the four geese without the framed-in blocks, but when I put them together all I could see was white!  I thought it was just too much and since this about using Picnic and Fairgrounds, I decided to add more of that fabric in.  Then I tried to lay it out with the geese exactly the same.  Not so good.  They looked liked robot geese all lined up--too much the same.  This was the best layout I came up with in the end.  I like it quite well.  I debated about the quilting on this one too, but in the end I was so happy I decided on a simple all over stipple as it was so hard to move this around on the machine.  The seams were so thick!  Well, I hope my partner likes it too!
Posted by Jeannette Bruce at 9:43 PM

Oh gorgeous! I've been wanting to try one of these for ages!

Love it! A awesome quilt. The colours brighten my mood. One day I'll make one too!

Oh this is gorgeous, love the colours and the circling geese!

Gorgeous! I love it!

This is gorgeous! I love the layout you came up with. The red around the outside and the blue/green in the middle set off the flying geese perfectly. The quarter turn you've given each block makes it look like they're spinning. Very cool.