Welcome to the World Oliver 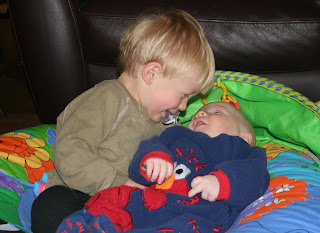 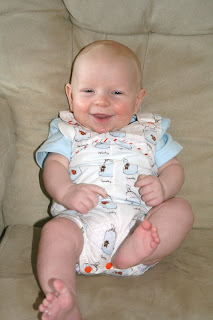 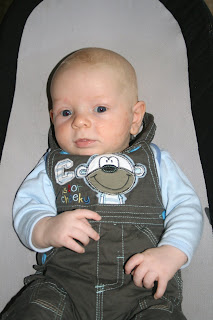 Ok, so I have been away from the blog here for a few months now, but with good reason! I've got my hands completely full with the arrival of Oliver! As my mom and aunt say, "They are both a full time job on their own!" Honestly, I do not know how anyone with children manages to have a life other than full time looking after the kids and keeping the house going at least somewhat... But, I should here say that Oliver really is a dream baby. He eats well, sleeps fairly well and puts up with his brothers constant cuddles (which is very cute). In these photos he is already over two months old! I'm so happy that he doesn't seem to have signs of allergies like his brother. At least if he has them they won't be nearly as severe, which now I am realizing why I thought having kids is soooo difficult. Alexander was difficult and being a first time inexperienced mom I had nothing to compare it to. Now I do and I can breath out and finally say to myself, "Oh, it's not me, I was actually doing a good job!" But, nevertheless, my days are very full and we keep going from the break of dawn until I get them into bed at 7! I have just started to get some hours of sleep again, which is a whole lot better than I thought I would be at this point.

I did a lot of sewing just before Oliver was born, so I will be posting images of those items and catching you all up on that in the next few weeks or so.
Posted by Jeannette Bruce at 9:20 AM

Congratulations! What a perfect and beautiful baby boy! I have to admit I'm a little partial to boys ... I have three and they are my best friends now that they're older. Can't go wrong with a boy!

A very warm welcome to young Oliver - he's beautiful as of course is Alexander. Enjoy your sleep - it is so precious when they are young - lol xx

congratulations! what a cutie~

Congrats on your beautiful baby! Thanks for posting....I check your blog quite frequently to see your beautiful quilts and was hoping everything was all right when you didn't post for many months....so glad to hear they are! When kids are little it is a full-time job but as they're older....maybe in a year or so you will find that you have lots of time to create because they will be entertaining each other!

I seriously was going to leave a message and ask, "Where are you???", but then you had a new post when I got here! I was hoping your little one had arrived safe and sound. He is darling, and so is his big brother. Congrats!!!

Glad to see the safe arrival of Oliver. Look forward to seeing the latest creations!