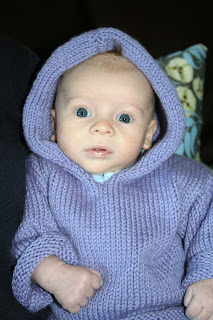 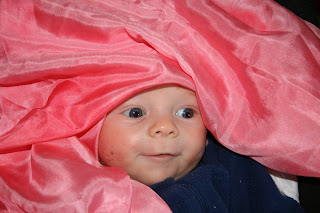 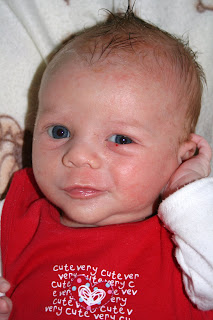 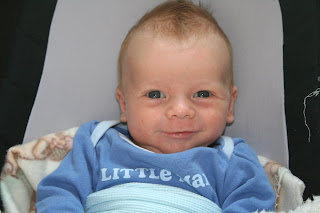 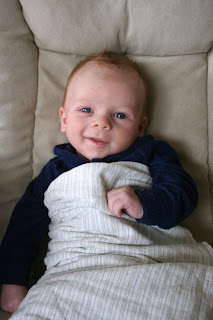 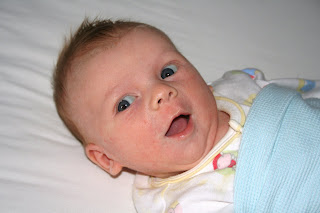 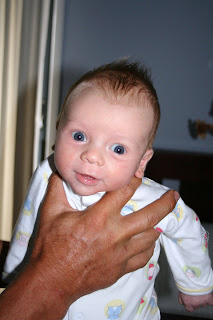 Ok, I think it's safe to say that I am now a mum addicted to her own baby. I know it is indulgent to post so many pictures of him, but I really just can't help myself. He really can be such a cutie sometimes.

But, to be truthful, he has been quite a handful and is wearing me completely out. I guess the term would be called colicky, but in fact I have discovered that the problem is a milk protein intolerance. It has been very difficult for him as well as us, but I am now confident that we are on the right track. I have had to give up all dairy foods and it will probably take at least another week for all the dairy to go from my system but he seems to be getting better every day. Apparently this condition is a lot more common than most people realize. At least 8% of all new babies have a food protein intolerance and perhaps more. It can react in babies in different ways including skin rashes, blocked noses, reflux, irritable behavior, wind and gas pains, etc. The good thing is that it does not mean he won't be able to have dairy in future--in fact they seem to suspect that the earlier the issue is addressed the less likely the individual will have allergies and reactions in future.

Anyway, I am just now starting to lift my head from the fog of it all--things escalated about two weeks ago and thank goodness for best friends who have been through all of this already to give advice! As well as a couple of very good nurse midwives... I am now wary of the doctor who delivered him who told me to just put him into a room and close the door and let him "cry it out".

Sorry for not having the quilting photos yet... I will get to it one day soon, I hope.

On the knitting front, I did want to show you in the first photo one of the sweaters (hoody) that I knitted while still pregnant. It's a pattern from Debbie Bliss using her fab yarn called Cashmerino Aran. Yummy yarn that is so super soft!

The second photo is Alexander playing with his Steiner silk... No, he's not being girly with the pink, it's the Steiner color for all babies--so I am told. He does love it!
Posted by Jeannette Bruce at 8:22 PM

He is a beautiful boy with a lot of character in his face already! Congratulations!

I have been waiting two weeks for photos. It was worth the wait! My gosh he is cute! Really cute! I could get addicted to him too!
Welcome back. I miss your blogs, and you missed my giveaway...boohoo.

Alexander is a beautiful (hansome) little boy. Do indulge us with his pictures. I do enjoy watching him grow. Love the hoodie that you knit, very nice work. Hopefully you have got to the root of the problem and things will get better real soon. Take care.

Hopefully it all gets sorted out soon. Jacob seems to be putting on the weight now as well. We go back to the specialist on Thursday for an official evaluation & to find out the results of his tests...

Hi, just found your blog through Nanci at QuiltingAtTheCottage. What nice quilts you make and such a cute baby boy (and I usually am not a baby ooher and aher!).

Stop by my blog some day if you feel like it, I always love visitors!