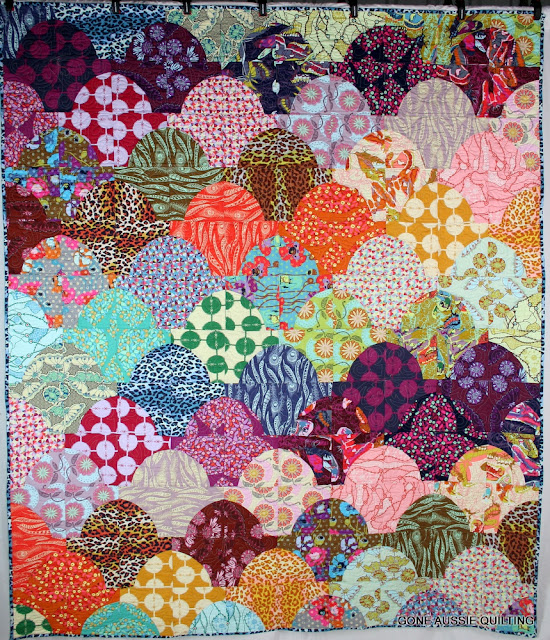 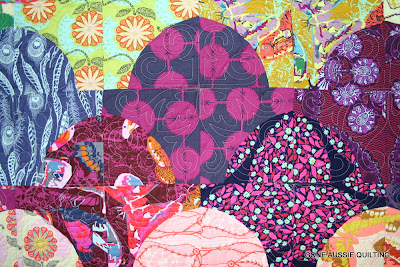 It's been a week.  Still recovering from the brown snake incident where a five foot extremely dangerous brown snake got within feet of where my kids were playing outside.  Since that incident I've been giving lots of extra cuddles to my boys and generally feeling a bit out of sorts.  That was the first time I really felt like I wanted to move back to Michigan (where there are no dangerous animals)!  Seriously, I know dangerous are around here, but it is another thing to be confronted with them!

Here I have taken a picture of the finish of my drunkard's path quilt using the Field Study line by Anna Maria Horner.  This took me forever to quilt on my machine as I decided to try custom quilting this one.  That means that for each block I had to click around the borders of each individual part and then scale it correctly on the computer before stitching it out.  That is 240 times for this particular quilt!  This is why custom quilting is so much more expensive to have done than all over patterns.  Anyway, it was fun and I will be practicing more of it along with trying out more free motion quilting (not computerized) in future as well.
Posted by Jeannette Bruce at 7:55 AM

It turned out beautifully!

Your quilt is really wonderful and I am glad you are all fine.

Lovely quilt - Field Study is such a beautiful range. And I occasionally contemplate moving to New Zealand as I am terrified of snakes too!

This came out really well!!! I know what you mean about the custom quilting too. You didn't tell me about the snake incident!!!!

That quilt is gorgeous! I had to comment because I'm also a Michigander married to an Aussie (I'm in Melbourne) and am happy to be away from Michigan winters, but these Aussie spiders are even worse! Glad you've recovered from the snake incident. :)

It's absolutely stunning! We have some dangers here too but haven't been confronted by my boy yet - scorpions are my dread! Glad you are all fine :-)

Beautiful quilt, I love this line! But lets talk about the snake, wholly cow!! I am so afraid of them!!! I hope no one was bitten.