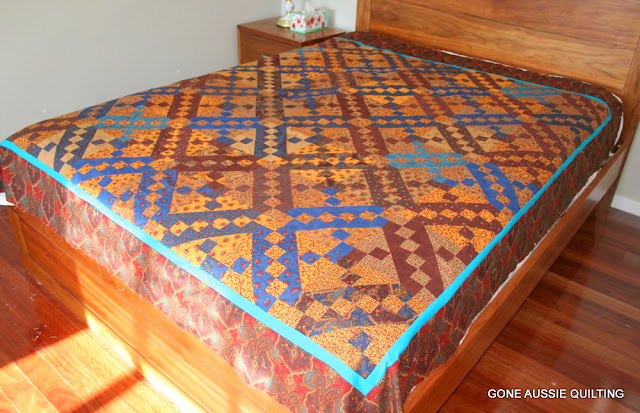 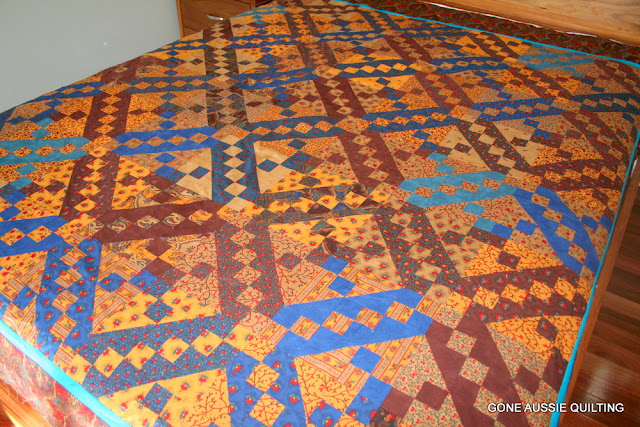 Another completed quilt top!  This one also only needed the final border putting on it to be considered a finished quilt top.  I know that most of my readers will not be enthusiastic about this quilt as it is not modern, but I actually like this one a lot.  I like modern, but I also like civil war prints too and I think I will always appreciate them.  These fabrics were from a line by Moda called Climbing Jacob's Ladder.  Of course that is what inspired me to make a Jacob's Ladder quilt out of the fabrics.  And the turquoise blue is what makes me particularly like this quilt.

The reason it took me so long to put the final border on this quilt is that when I ordered the border fabric for this quilt I thought that if I bought enough to go the entire length of the quilt that I would only have to cut it along the grain length to make the border.  Nope. The direction only worked for two directions not all four.  So, I realized that I was going to have to piece the border together.  And to line it up as well.  Ugghh!  And, to make mitered corners, which I've never done before.  So, all of that seemed quite daunting. But, yesterday I took it slow and after a couple trials, I did managed to figure it out.  I almost felt like an experienced quilter by the end of it.  Get that word, Almost.  Not really quite there yet.  I did wonder if there was a way to line up mitered corners so that the print would look continuous on the corners as well.  But, my head got tired and I figured I was fine with it as it was.  Does anyone know the answer to that question?

I thought I would include a few pictures of the boys to show you that even though it looks like I'm getting work done, they are always here with me keeping things lively!  Never a dull moment, most obviously boys and always as cute as the dickens!
Posted by Jeannette Bruce at 3:18 PM

I am a quilting mom too. My youngest boys are 4 & 2 1/2 and I agree it makes quilting lively! Another beautiful top! Just amazing!