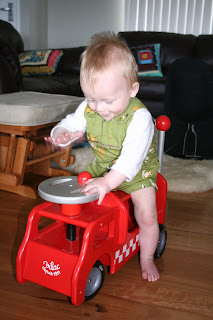 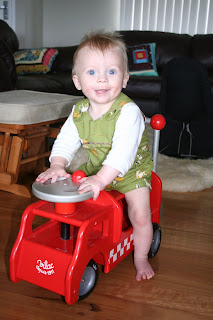 I haven't posted anything about Alexander in a while and so I thought I would show you how he is growing up! He's already 9 months old! I can't believe how fast the time is going by. He's not quite walking yet, which I guess is a good thing, but he's been able to stand up and cruise since he was 7 months. Here are some photos of him playing with his fire engine that his grandma bought him. It has a little horn to beep, which he likes to use. See the Heather Ross outfit he is wearing? More homemade clothes from his mom. Poor thing.

He loves to be on the go! We took him to the beach last week for the first time and as soon as we set him down in the sand he took off in the direction of the ocean. The funny thing was that he didn't even look back! We had to go and stop him. He saw all that freedom and was gone. He really is full of so much personality and makes me laugh all the time. 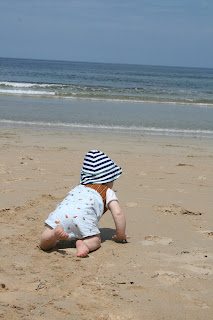 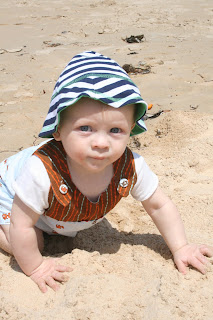 I am still on the restricted diet and feeding him (as much as I can anyway) and I actually now see it as a really good thing that I am going through this as well. It has helped me learn how I am going to cook for him through the next couple of years. I am getting really handy at cooking Asian foods--lots of rice dishes with Chinese, Thai or Indian flavors. I also am getting used to many more baked dinners than I normally would eat. Alexander is benefiting in that he has tried so many foods that I think many adults have never even tried. He loves black sapote, hummus, tofu and avocado--all foods I never had until I was an adult.

I recently had a friend comment that I must have a nanny to be able to get so much quilting done. LOL. Now that is a good one. No, but I do make use of his nap times and then when he is awake we clean and cook together. He's very helpful sorting through the laundry basket, throwing the laundry pegs while I hang his diapers, tugging my pants off while I wash dishes, chasing and turning off the vacuum while I vacuum and that sort of thing. I think too, that on the farm there are fewer shortcuts. It's not like I can order out when I don't have the energy to cook a meal. I can't just drive to the mall or something similar to get a break during the day. I'm here all day every day--the nearest metropolis is 2.5hours away. So, can you guess that the nanny comment had me a bit riled? I'm with him every day all day and he has never been with any sort of sitter other than his grandma for a couple of hours. Quilting is there for me to keep me sane. Of course the comment could have been just stating that I manage to get a lot done--but still... A nanny? Please.
Posted by Jeannette Bruce at 9:16 AM

yes being out of town is a nightmare when you wished you could pop down the street and grab takeaway...........

That nanny comment is infuriating! You definitely have your work cut out for you living so far away from so many of the shortcuts that other mothers are able to take. As far as having time for quilting (or any other activity) -- we always make time for the things we love/are passionate about. It sounds like you are enjoying and cherishing these early years with Alexander. That's the most important thing of all! Keep up the good work :).

He is beautiful! Is he feeling better with the new diet? Maybe you will have to share some of your new recipes.

As for the nanny comment - while I admire how much quilting you are getting done, I figured that you were better at managing your time.

you were better at managing your time THAN ME.