A Long Journey To Find Answers 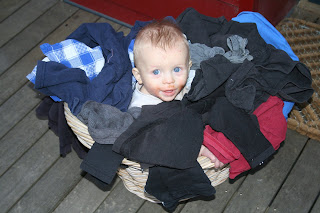 Whew. What a long journey Alexander and I have been on. I haven't mentioned too much on this blog what a time Alexander and I have had since his birth. We've had a difficult time of it and being a first time mom one always second guesses oneself. From the beginning he was said to be "colicky", which is a term I believe just means something is wrong and we don't know what that might be. About 2 months in, my best friend from home got me onto her midwife who advised me to give up all dairy and wheat. He started to improve greatly, I suspected that wheat wasn't the problem and I went back on it. He did better for a while but was never easy in any way all along. I realized this when a Swedish friend came over and saw how he would scream and suggested that there was still some underlying issue, she suggested going off wheat again, but I was unsure too if that was the problem or yet something else all together. I took him to my GP right about the time I went off of the dairy and wheat. She told me that he didn't have an allergy/intolerance to dairy and that if he did he should be throwing up, etc. She wanted me to supplement him with formula and I didn't want to, but because he had a continual stuffed up nose he never fed properly enough to get enough from me. I did a lot of research and told my doctor that I would supplement only if I could put him on Neocate which is basically the only formula safe for a baby with food intolerances. I got the prescription from her and that was good. Later, she referred me to a peditrician from Sydney who just gave me creams to put on him and said that intolerance were only for throw uppy babies.. Then, a few weeks ago my GP refused to refill the prescription of Neocate again. After I had become dependent on it, plus it is a very unpleasant tasting formula and takes a while for babies to get used to. She wanted him to go on milk formula saying that he was now old enough and should be fine. Basically, just saying that I was wrong to believe he had any food intolerances and she would no longer support me. I was so upset because I knew that if I even tried giving him formula to test his reaction that it would be very difficult to interest him to take the Neocate again and I knew it would make him sick again anyway. So, I said to her, "What if your wrong? It's going to be me that spends all night holding a screaming baby, not you. I want to see a skin specialist!" She is a good doctor in many ways, don't get me wrong, but stubborn about believing she is right. And so am I! Luckily, I got Alexander in to the skin specialist right away due to a cancellation. He spent an whole hour with us and the first thing he said was that it was excellent that I supplemented on the Neocate as that was what he would have recommended. Within 10 minutes we knew from the skin test that Alexander is very allergic to dairy, but also to egg, and possibly wheat and peanut (borderline). He wrote a long informative letter to my GP re-educating her about eczema and food allergies in babies!!! And, I have to say I feel so much better since all along when I said he had a food intolerance people looked at me as if to say I was making it up! I did not feel supported by anyone, except my best friend who has dealt with this with both her kids. Also, the looks and comments you get about it being your first baby and how you seem to be having a hard time coping because you don't have the hang of raising kids yet... Etc. etc.

Well, it has only been a few days now since I've gone off of all nontolerated foods and he is sleeping at night, taking naps (he never did this well from the beginning), he's happier when he is awake, his skin is clearing up and life is so much easier. I now know that having a baby is Not as hard as I thought, but that I have been dealing with an unwell baby for 7 months now. This is such a relief. The photo in this post shows what he looked like just before going to the skin specialist. I hope in the next post to show you how much he has improved since then. In the meantime, I'm off all foods not tolerated and we will trial them one by one to see how severe his reactions to each are. This is much safer than actually giving to him directly later on so it is very good that I am still breastfeeding him. Hopefully his reactions will not be too severe and that he will in time outgrow all of these allergies. I feel that he stands a better chance to outgrow them if his system isn't bombarded with what he is allergic to!

There. I just needed to vent.
Posted by Jeannette Bruce at 9:13 PM

WOW, I'm glad that a) you had a chance to vent, b) you found a solution, & c) everything is looking better.

My husband does not know how easy we have it... (I'll have to remind him once again.)

Oh my goodness what a tough time you have hard. I am so sorry it took so long to figure it out...not helped by a stubborn doctor...how frustrating. I am SO glad he, and you, are feeling better. Hopefully good times are a comin'! How wonderful to finally have it figured out. Maybe you will be able to sneak more quilting time in now ;)

I am sorry that you have had a such a frustrating time with your doctors. I can't understand why Western medicine is so unwilling to acknowledge that people (a lot of them!) have food sensitivities.

So glad you found a helpful dermatologist to support you!

mothers know best and you have to stick with your gut instincts........we may not know what is wrong but we have to fit to get an answer that is right.........goodluck with your much happier baby........

Wow. I hope my comment back in February helped you in some way. I'm not happy to be proved right by any means, but I hoped that it helped.

I swear I can pick a allergic child a mile off now. I don't think that most people have ANY idea of what it is like to have a baby with these problems. It is hard and it is exhausting and some days you think it will kill you, but you keep going on in the search of answers.

So glad that you have some answers now and that he seems to be getting on track. Hats off to you for your persistence.

Your story sounds so much like our story with our bub no.2. The clinic sister kept saying 'keep feeding, keep feeding" as he wasn't growing, but I knew that there was something wrong - he would just scream with pain after I fed him. And his nappies...yucko!
Though must say, I tried going on the elimination diet and still feeding him but apparently there is always a certain level of lactose in breastmilk so he ended up being fed exclusively on the "magic formula" It changed him from being a skinny, screamy little person to a healthy looking delightful little boy.
Good luck with the challenges ahead. continue to go with your gut instinct and you'll be ok!

Oh you poor thing...my sister went through this with one of her babies and it was so hard. She discovered that there was lactose in many things you wouldn't think. It's a hard road but so good that you continued to breastfeed as that makes it so much better for the baby. Good for you hanging in there and finding the answers :)

Whoa! What a trip you have had. It's a wonder you can function! I am so glad you went to the specialist!
We aren't supposed to give babies eggs till they are two years old in any event.
You must feel so much better now that you can actually get some SLEEP! It's the one thing we lack as young mothers.
Good for you to sticking to your guns1 Good luck!

So sorry you had to go through all that and it will be a constant vigilance for you. Our oldest now 7 had horrible eczema as an infant. I also insisted to have him tested and sure enough allergic to dairy, eggs and peanuts. It has often been a hard battle, but it does get easier. I found just knowing what the problem was, eased my stress. Now you can deal with it.

Light at the tunnel, most kids really do outgrow the milk and dairy. Our son grew out of it later than most, but for the last year he has been okay with dairy. Fingers crossed on the others . . .

Your gut feeling as a mom is powerful and almost always correct.

It sounds like you are on the right track now. And it also sounds like the time I had with my son Andrew 23 years ago. Fortunately the doctors decided very quickly it was a milk allergy - and a very severe one - and not because he cried and was fussy but because he was only a few weeks old and his nose and sinuses were so stuffed up that he would have trouble breathing. I went off all dairy by the time he was 6 weeks old and he cleared right up. If I so much as had a piece of cheese pizza one day - the next day Andrew could barely breath! So -- it is NOT all about throwing up. And the eczema is another huge indication of allergies.

Andrew now eats dairy products but he doesn't eat much of them and never had ice cream until he was about 6 or 7 years old.

Good luck with it.

My son was fine as an infant but is allergic to eggs & peanuts (he's 7 now) and my 3 year old was allergic to milk until very recently. It is hard to have kids with FA, everyone doubts you... usually your relatives the most, and makes like challenging at times.

Hang in there... you are your childs best advocate and they are so luck to have you.