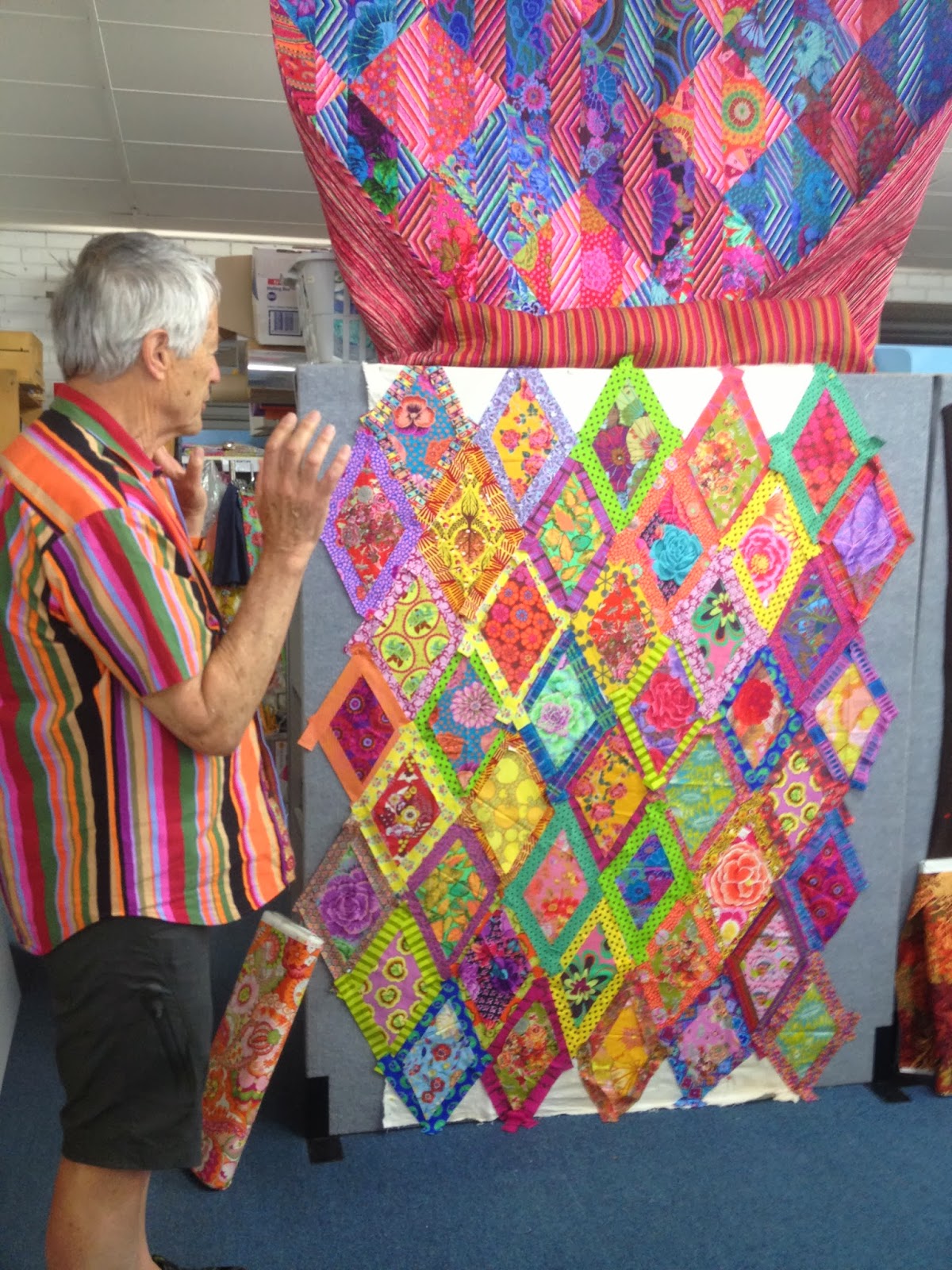 It's been a while since I have posted here mainly due to the fact that I've just barely been able to keep up with life in general due to sicknesses going on here with myself and the kids.  Nothing serious, just constant!  I'm still sewing though, but possibly not getting done everything that I would like to!  Nothing new, right?

I have had the opportunity to attend two workshops the last two weekends. Considering that I have only attended four workshops in my quilting career up until now, it felt like a very busy week!  Last weekend's workshop was with Chris Jurd, which I will blog about next.  This weekend's workshop was with none other than the wonderful Kaffe Fassett!  Nearly as long as I have been quilting, I have wanted to attend a Kaffe Fassett workshop.  I have spent many many hours over the years pouring over his books and dreaming of quilts to make inspired by him.

When I heard that Addicted to Fabric in Canberra was going to host Kaffe Fassett and run a workshop for the Bordered Diamonds quilt from his book, "Simple Shapes Spectacular Quilts", I jumped at the chance.  And I have no regrets!

If anyone is unfamiliar with how Kaffe runs his workshops with his partner Brandon Mably, they are all about the design process and colour placement.  There is no sewing involved, but rather a lot of cutting and placing of fabrics on a design board and then moving and arranging the fabrics around.  For me, this is the most exciting part of quilting, so a workshop dedicated to this process was extremely interesting to me.

The morning started out with a brief introduction and discussion on how it is important that we work quickly and not hesitate or over think what we put up on the design wall. Their mantra is the same as the Nike commercial, "Just Do It".  Most important was that we get something up on the design board and then stand back from quite a distance to look at our work.  They suggested using a reduction glass to look through so that we could see what was working and what wasn't working easily.

Neither Kaffe or Brandon teach the workshop in a manner that they spend time babysitting what you are doing, but rather there is the feeling (particularly of Kaffe) of someone standing in the background parenting with a bit of gentle guidance here and there.  This method I feel allowed me to be able to work and gain confidence as the day progressed.  After I had placed about 15 diamonds up on my board, Kaffe did wander over and was quickly able to see what the color palette was that I was mainly using.  He picked out about three or four of the darkest diamonds and said that they created too much contrast--too dark against the lightest of the fabrics that I had already had on the board.  It surprised me how simply taking out those diamonds, suddenly made the start of my quilt seem clear and gave me direction as to where I wanted to go with it.

I had brought with me a range of blue/purple, red and yellow/gold fabrics with a desire to try to use yellow in my version of his quilt.  I told Kaffe that I find it tricky to use yellow in general and wanted to concentrate on this as an exploration on how to use it!  Brandon mentioned that next to black and white, yellow is the most difficult color to work with.  Kaffe's suggestion was to add in green, which I didn't bring with me, so I did get the opportunity of having him go "shopping" with me to pick out possible fabrics.  That too, was an educational experience to see how his mind works.  I suggest that if anyone ever gets an opportunity to do a workshop with them to take them up on their suggestions!  It's the easiest way to begin to see what they already know.

Close to lunch time I had already starting working on my borders for each of the diamonds.  The suggestion was not to try and match the border fabric to the large diamond, but rather use instinct and choose the fabric based on what we feel works.  Using a single or two color fabric seemed to work better than using detailed fabrics with many colours.  Here is where I was up to when we broke for lunch: 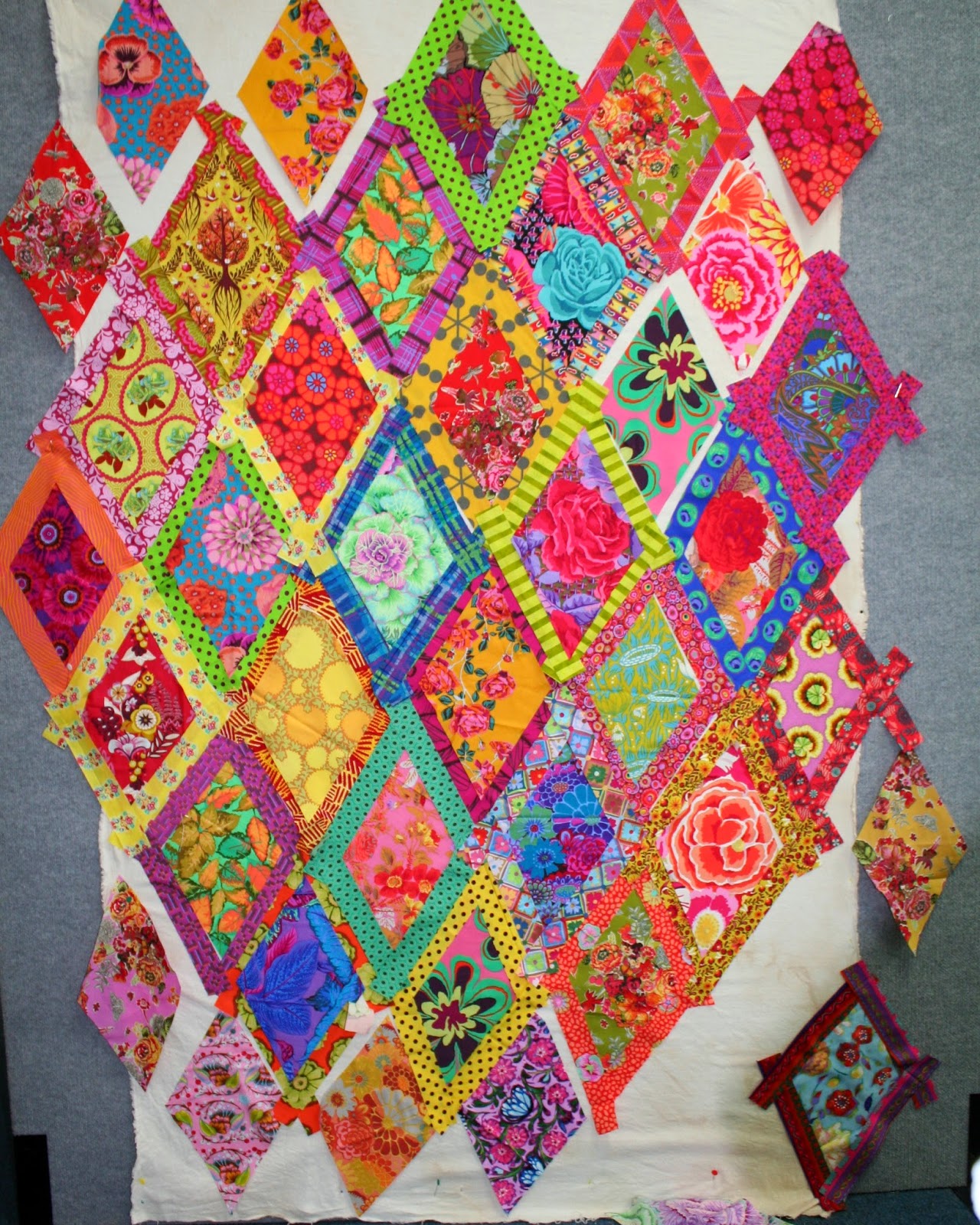 After lunch we kept working and trying to fill in as much as we could.  Kaffe would walk around the room, sit down on a chair looking very relaxed and just look.  Then he would walk up and point to an area and say, try this here, or this here.  What I got from it was that where there is high contrast next to each other creates a starkness and doesn't let the colours dance together.  Neither should the fabrics blend into each other. It was effective to choose  a different colour for the border than the centre diamond.  There is a subtle play and harmony when it works which allows the integrity of the shape of the diamond to remain clear.  Below is a photo of where I was at at the end of the day. 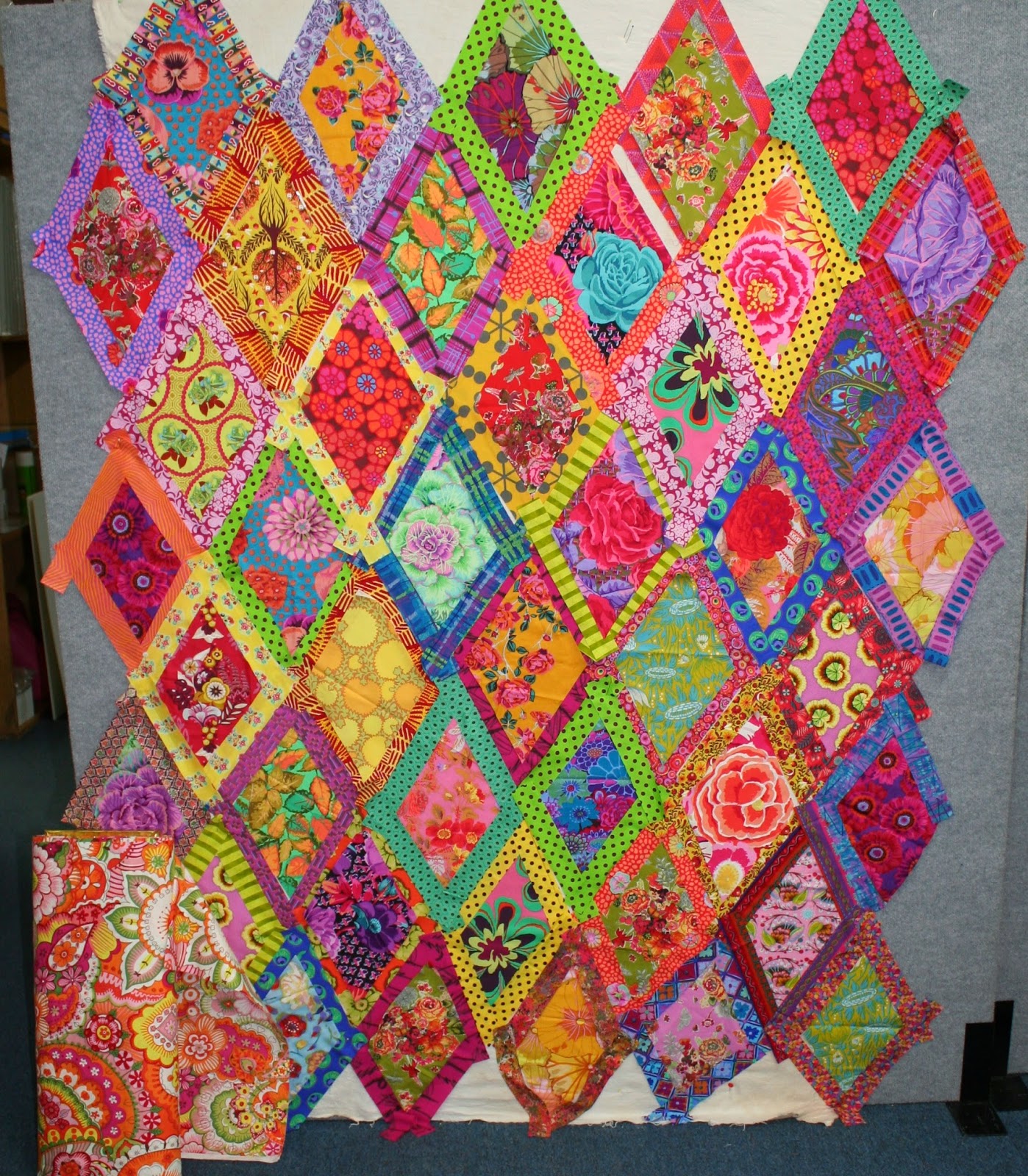 He then goes around the room and talks about the process each student went through to create their own palettes.  This was an extremely interesting part of the workshop and fun to see how each person came up with really beautiful palettes of colour.  This is a quilt I would like to try again to see how I could  make it work in a different palette.  Maybe next time I will try a darker palette.

Here are some photos of what some other ladies in my workshop made during their day at the workshop: 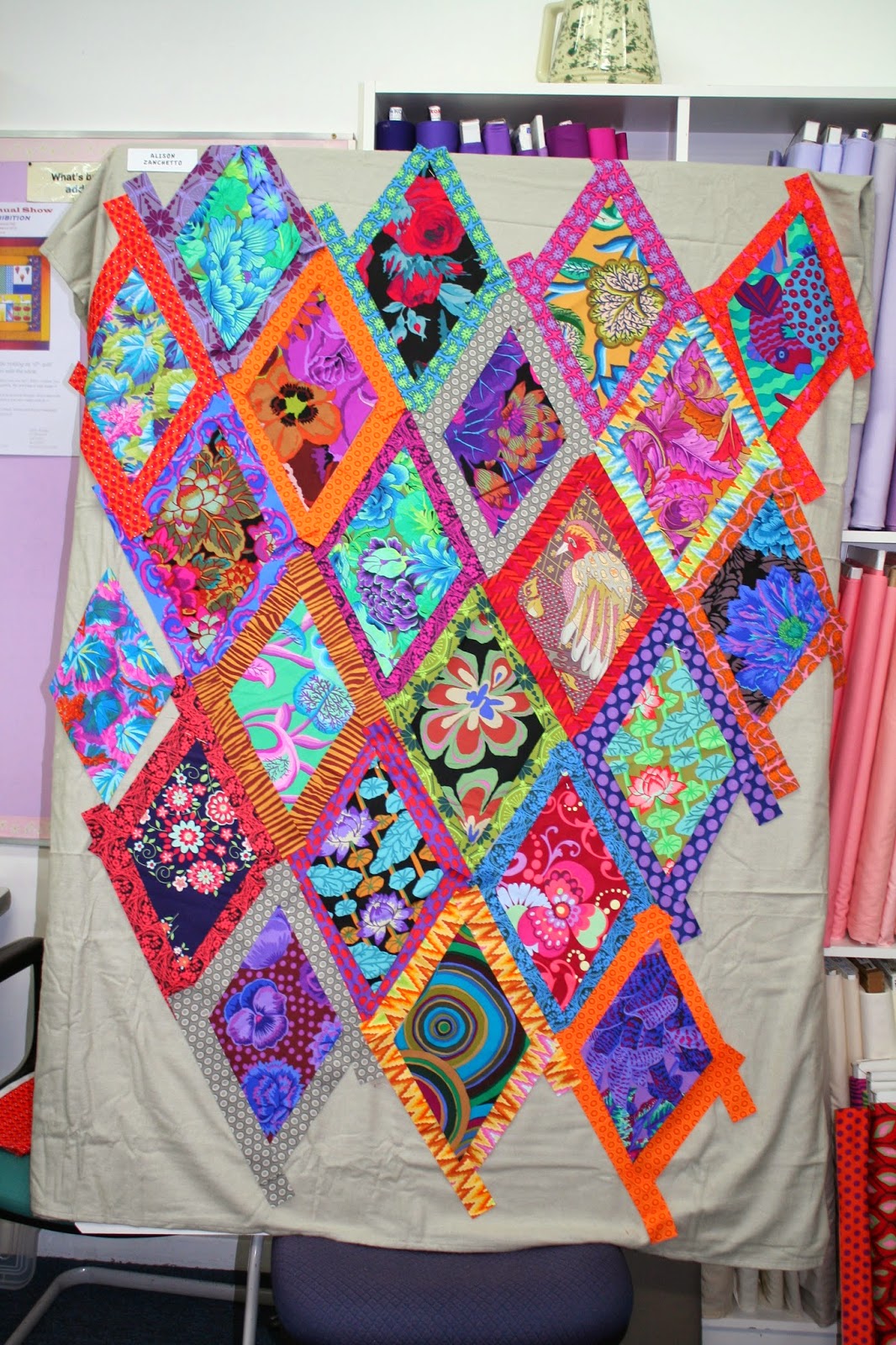 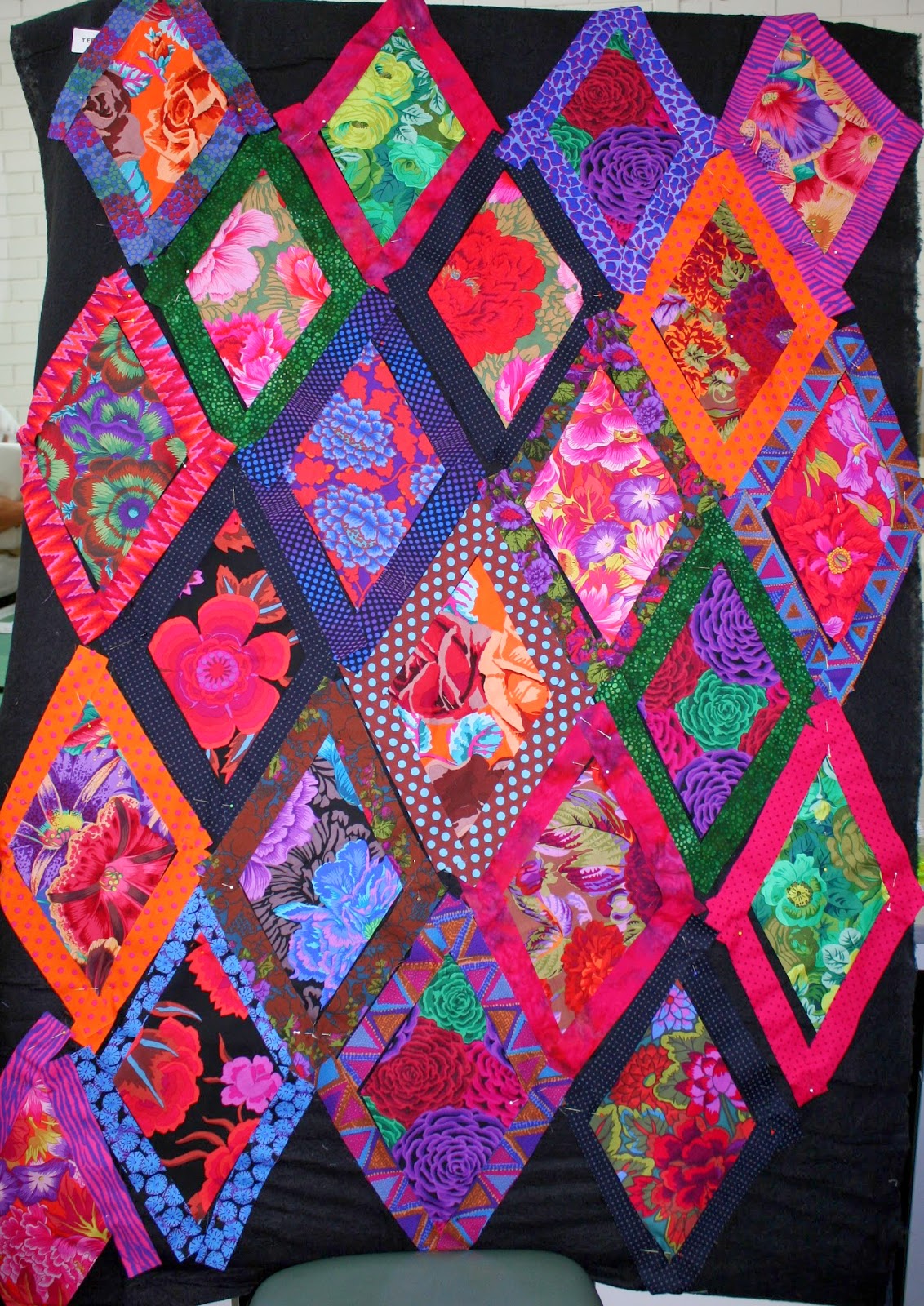 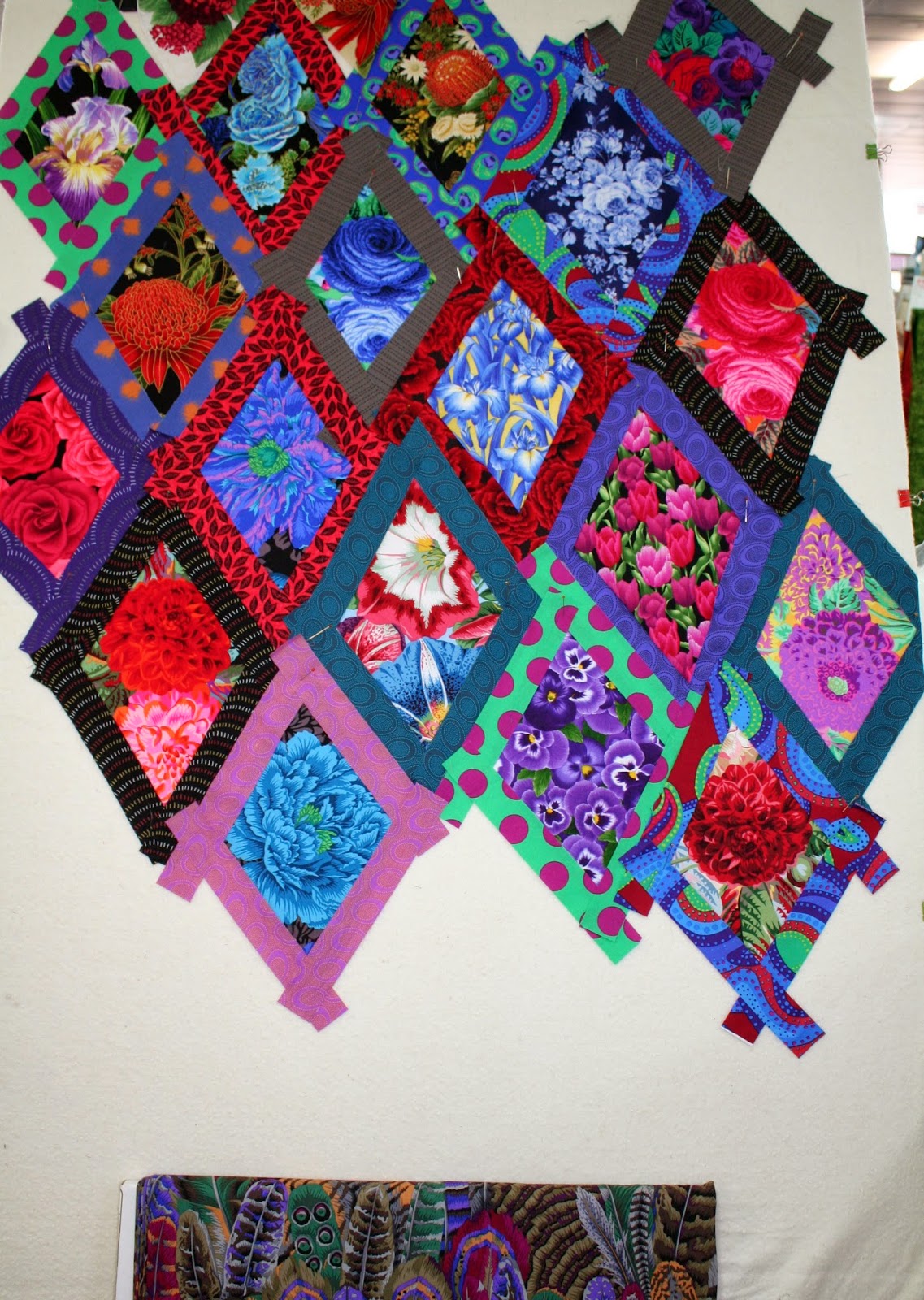 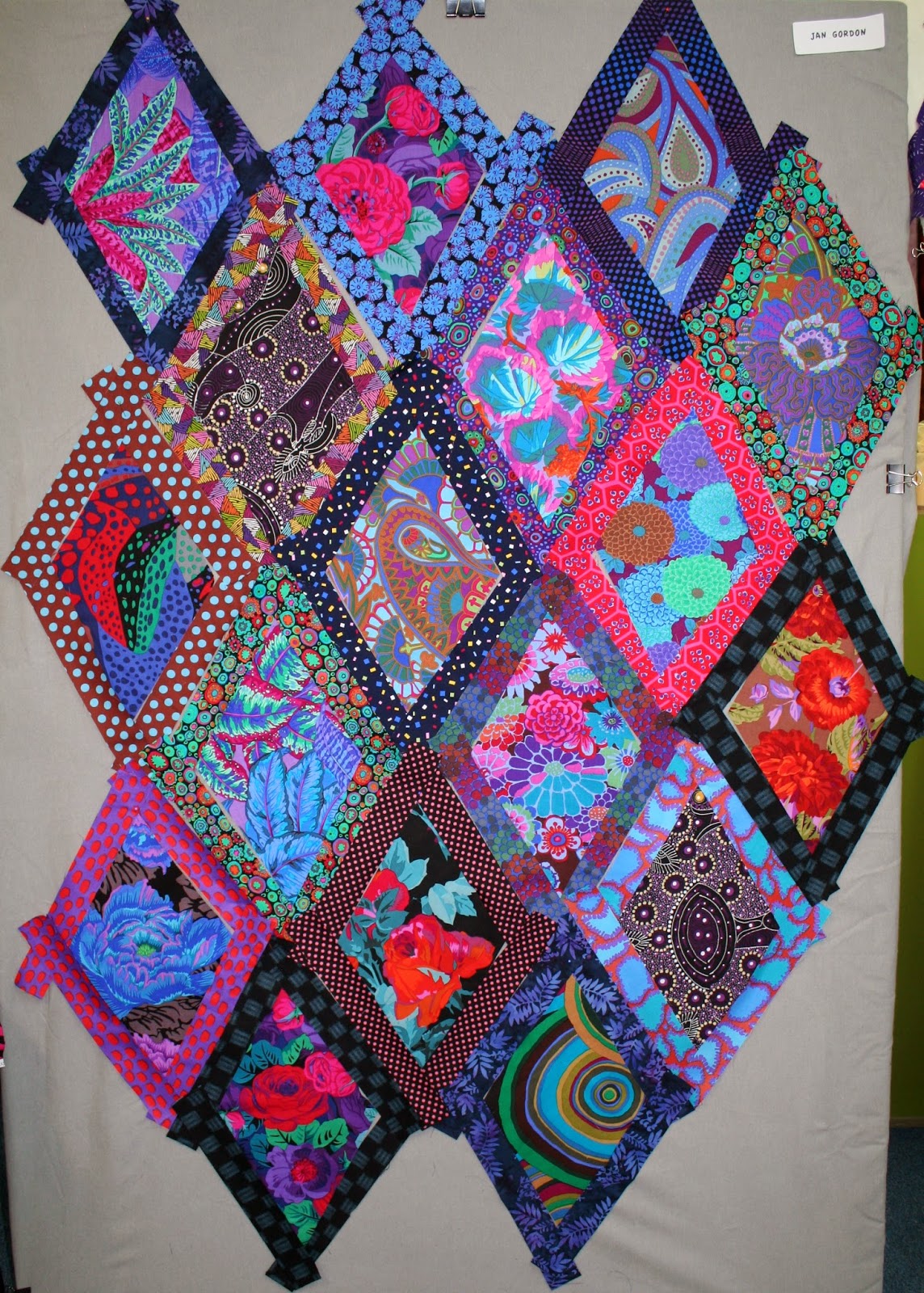 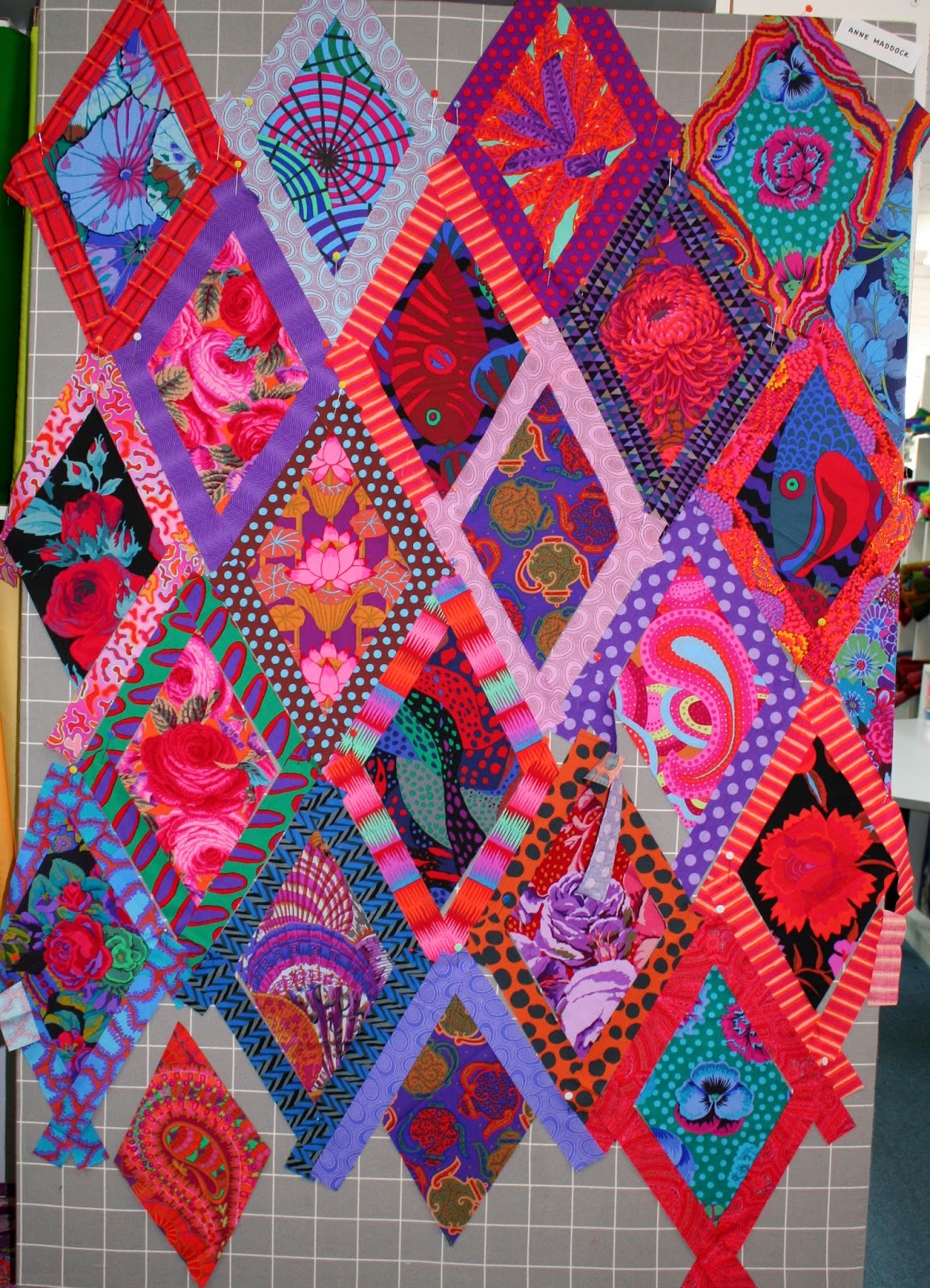 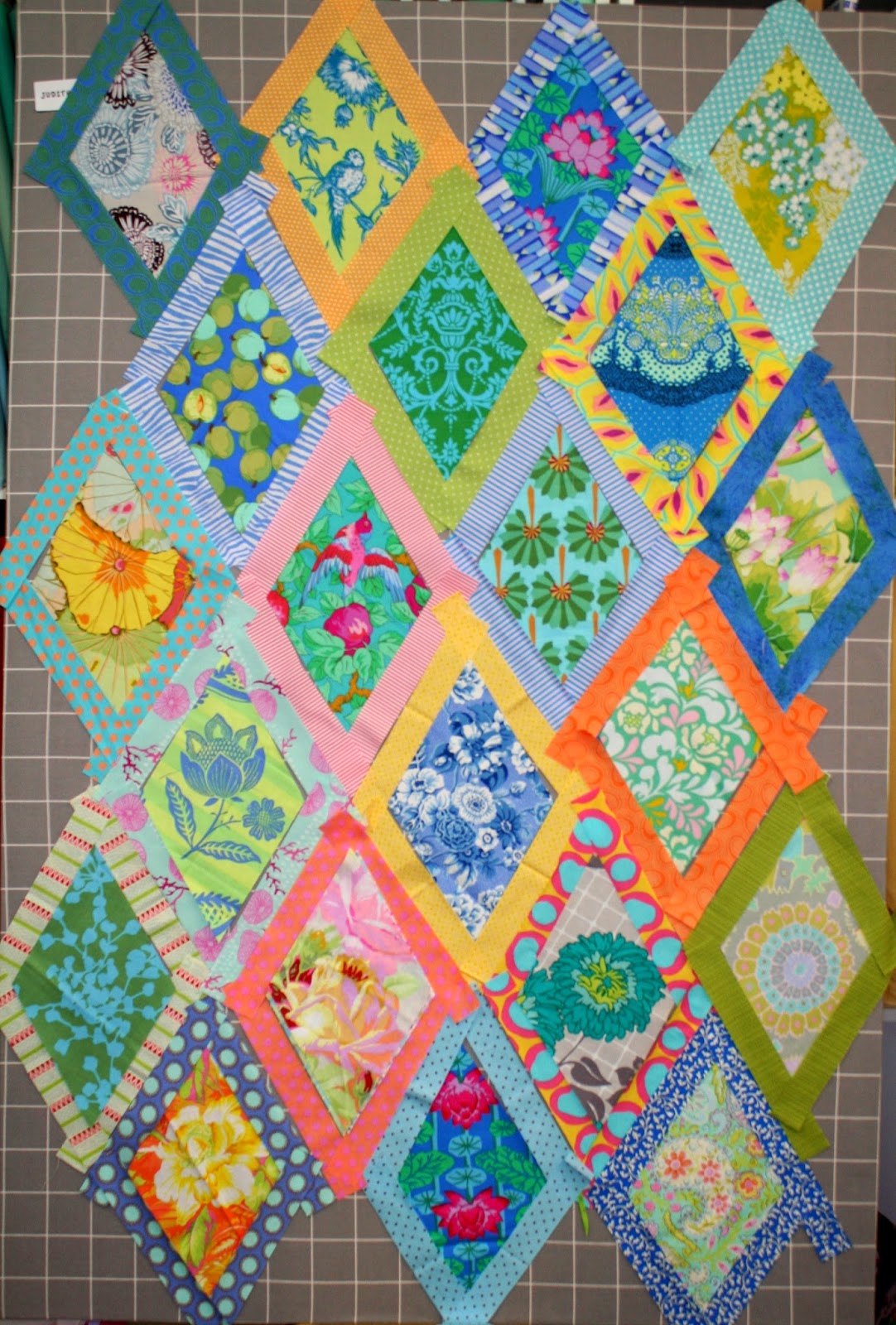 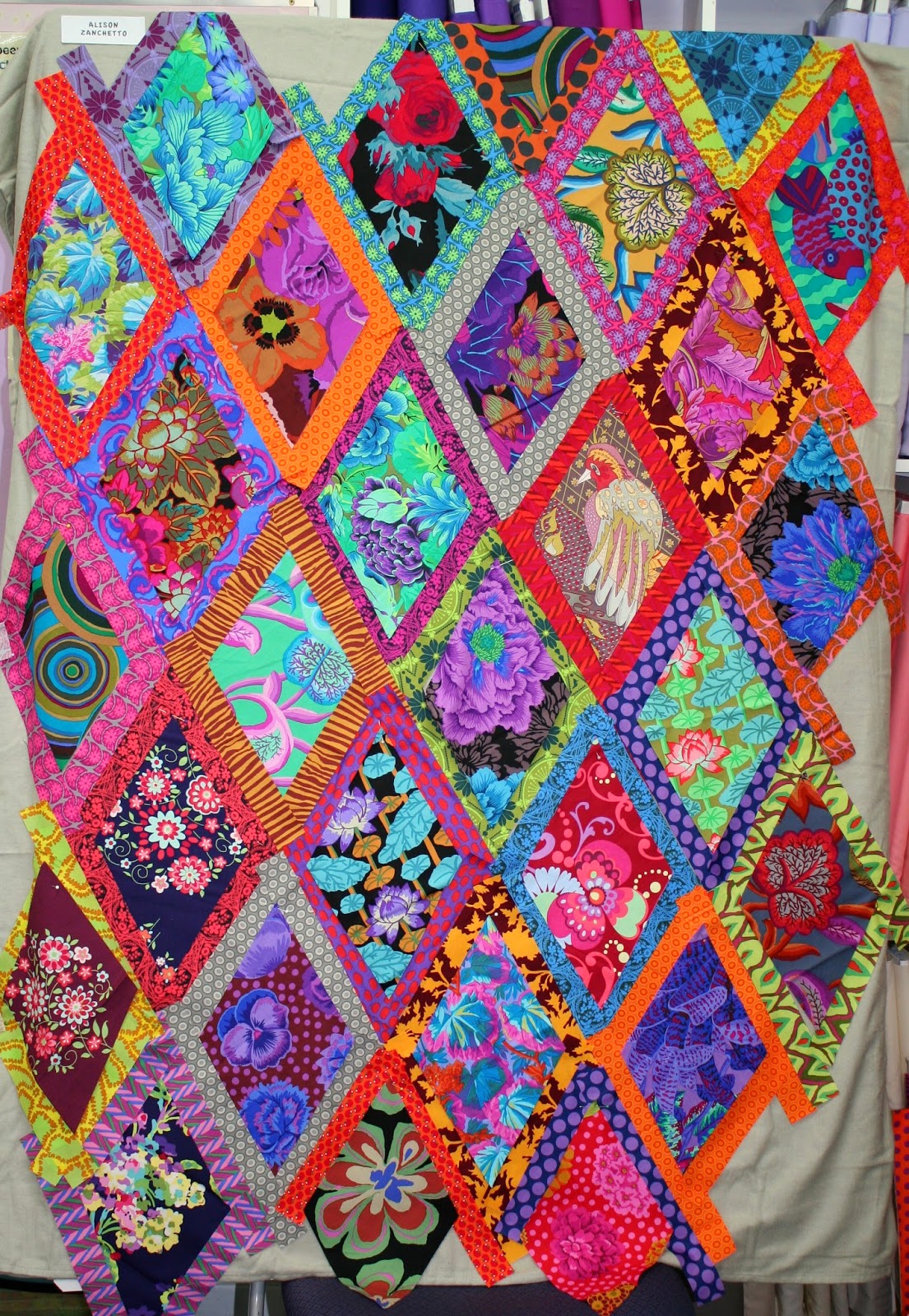 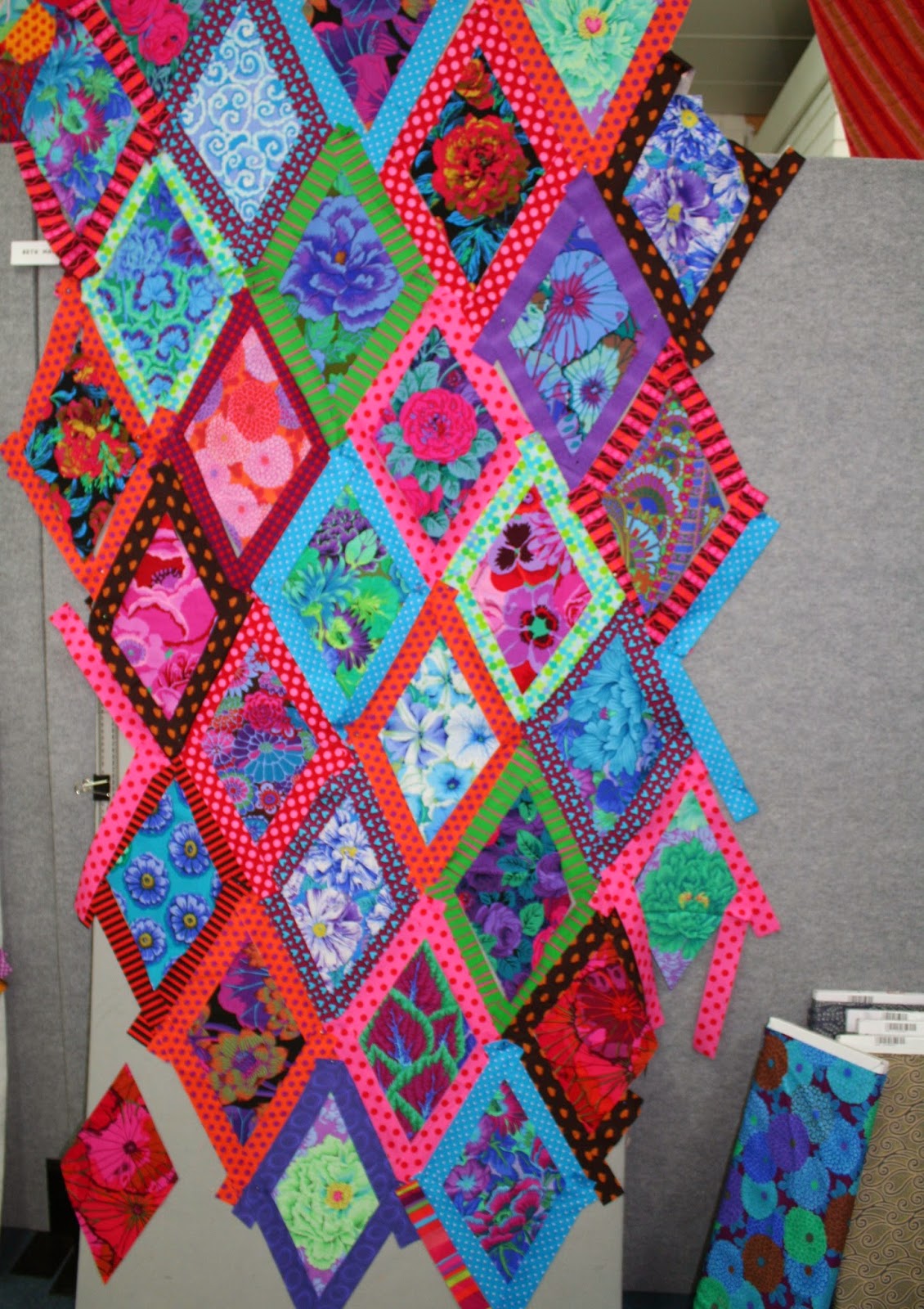 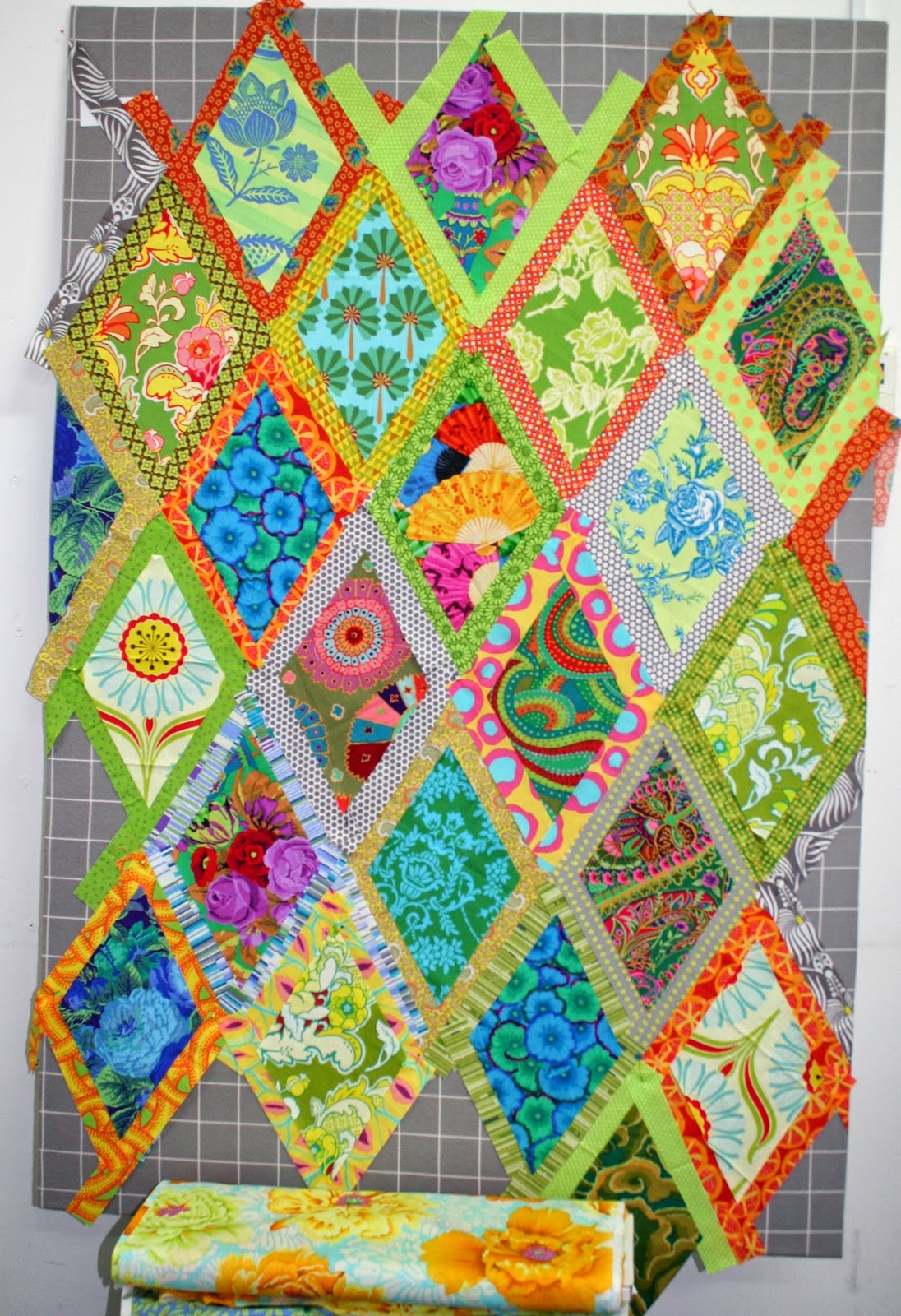 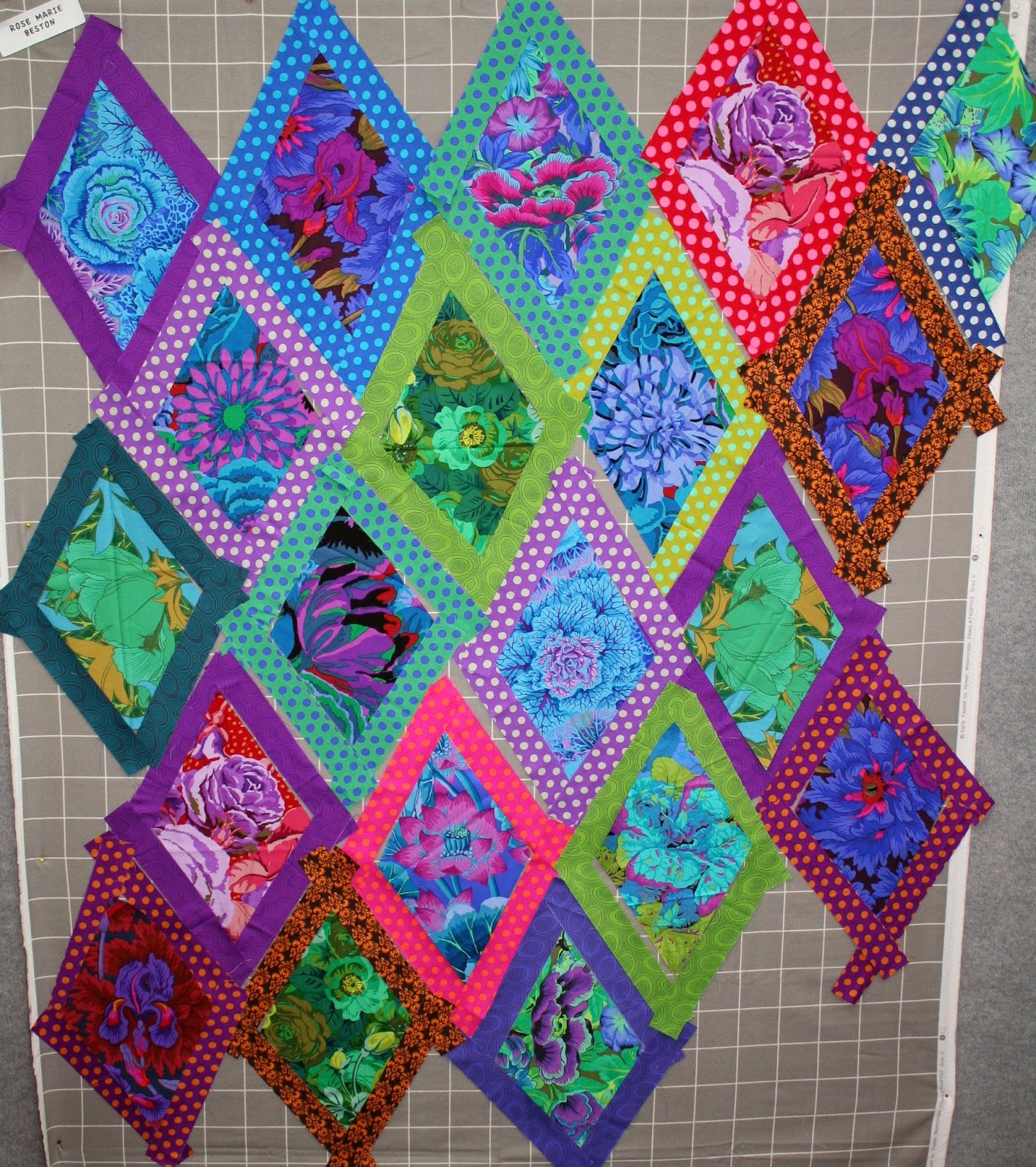 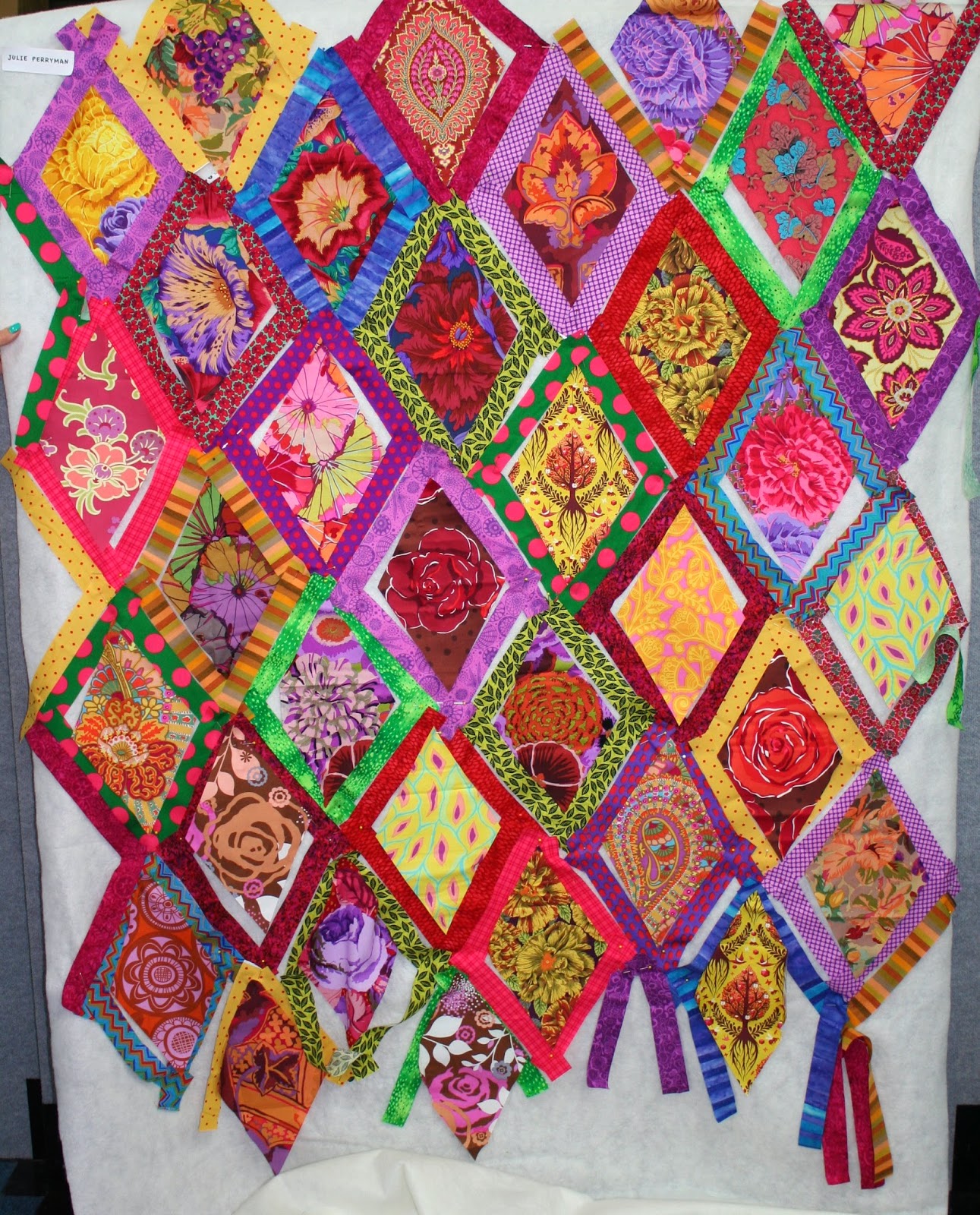 All in all, I was very pleased with the entire experience of the workshop.  It's an educational experience.  Be warned though, Kaffe and Brandon are very disciplined in their approach to teaching and expect you to be on your best behavior!  We had a very nice group, so everything went very smoothly.  At the end we got a chance to have our own books signed by Kaffe and then we rolled up our flannels with our quilt layout to be sewn up at home.  I hope to get mine on my design board in the next week or two so that I can still remember what I learned in the workshop as I finish it!  I want to add another row to each side so that it is the same size as the one in the book, which I believe is approximately 55" x 80".

If you ever get an opportunity to attend a workshop with Kaffe and Brandon, don't hesitate, just do it!
Posted by Jeannette Bruce at 10:38 PM

Thank you for sharing a snippet of color workshop. Many of us in blogland will never have the opportunity to take a Kaffe class. You did an excellent job of explaining the fabric selection process. To me your design wall quilt has lots of interest and is warm with the yellows. What is next? Do you sew them together?

It sounds wonderful! And the quilts will look amazing....kicking myself that I didn't book into his Brisbane workshop.

Jeannette, I love your diamonds the most! So versatile and bright. Just my type:)

Thanks for sharing your workshop experience - a very interesting post! The results are all stunning and so cheerful.
Hilda

Thank you very much for describing your day with Kaffe and Brandon. I think you went in with the right approach - very open to their suggestions. Your selections work really well together. I would love to attend a class with them one day.

What an amazing workshop. Thankyou so much for your very descriptive post. I just love Kaffe's work and that quilt is one that I plan to do. Beautiful work done by all, how inspiring. Looks like you all had fun. Lyn

That is so interesting. It is so different from how I plan a quilt, it would be very odd for me to just cut out fabrics all day long. I love how your quilt is coming together.

Very interesting thank you. I agree with the 'high contrast' comment - I don't like that look - I think it is far more visually interesting if you crank the contrast notch down a level or to.
Looking forward to your Chris Jurd post.

I'm sure you had a wonderful day and this was a great experience! It was interesting to read about it and I like your diamonds very much!

All the quilts look great, amazing how the different color combinations all work. I've taken a couple of workshops with Kaffe Fassett, and two that included Brandon, they are warm and considerate when speaking to you. Their color knowledge is extraordinary and they so willingly share. Glad you were able to take a class with them both.

I am a new blogger and love quilting. Not an expert, but I love to play with color.
The pictures from the workshop were very inspiring. Love working with Kaffe Fassett colors.
Been to Australia. Love it.

I just purchased a bundle of Kaffe Fassett fabrics today and was looking for a pattern to showcase the larger prints. Wow, I am really happy to have come across your blog. Your description of the process was extremely helpful. You gave me a window into the class. Thank you!

Find best Home based Business without any work, just invest and rest with your profit
EarningsClub.com