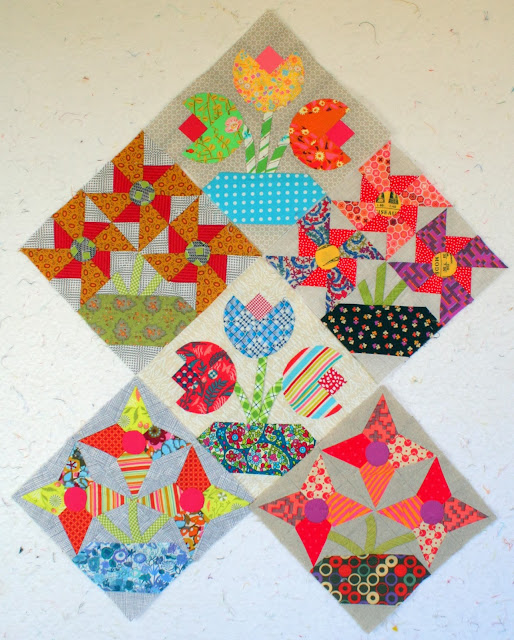 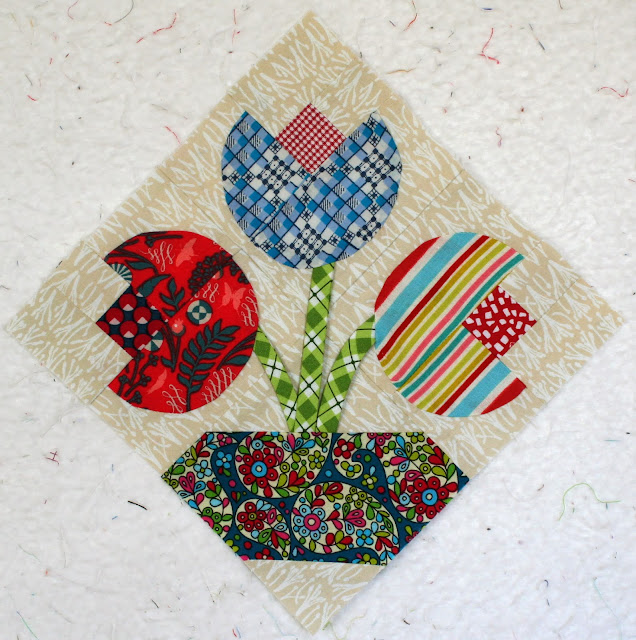 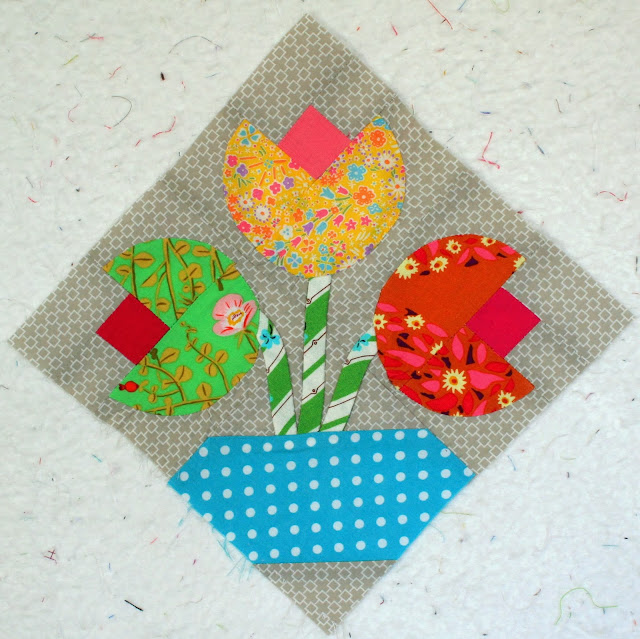 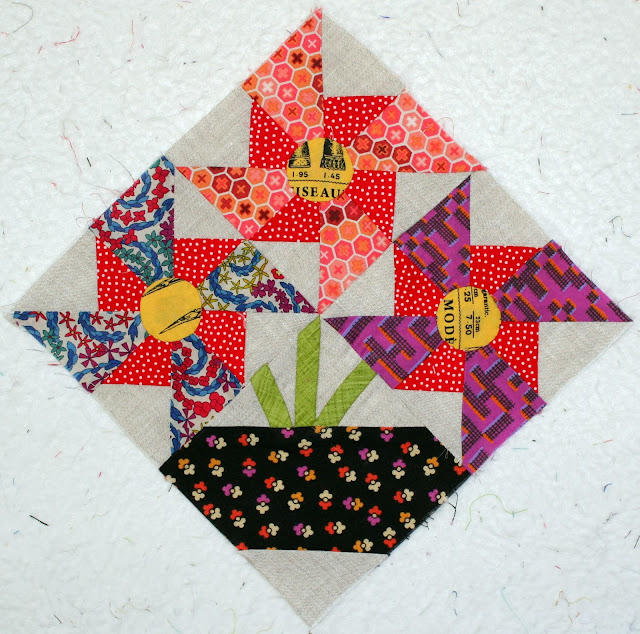 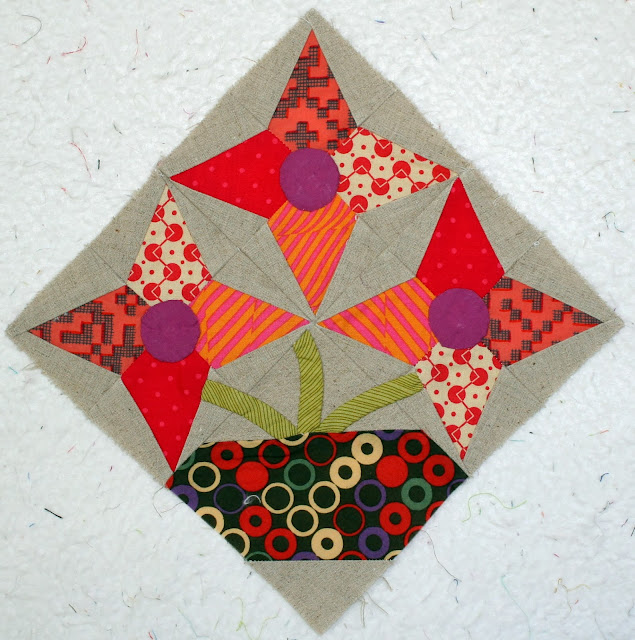 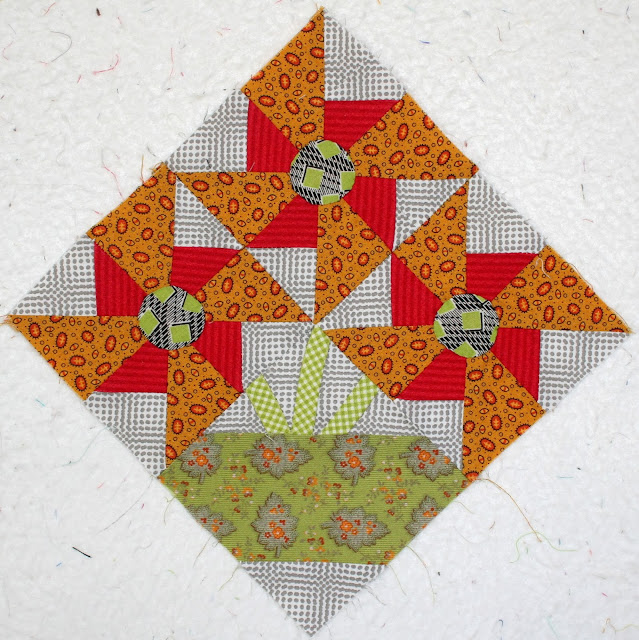 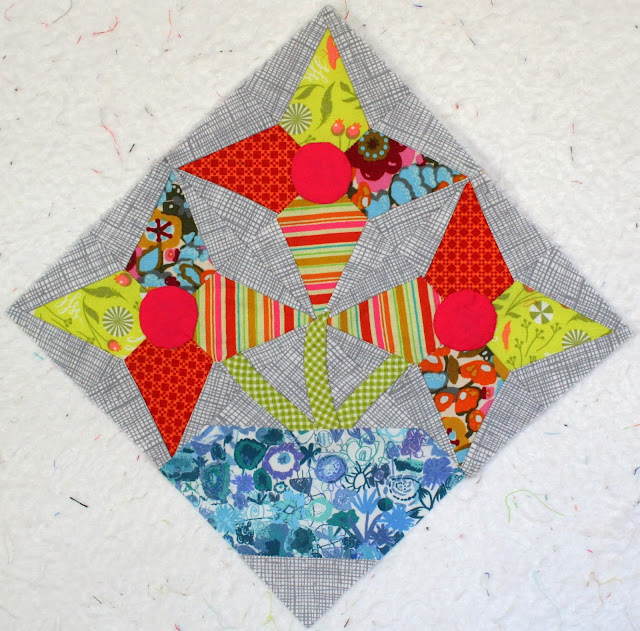 A few months ago (September), I signed up for Amitie's "Bring Me Flowers" BOM a pattern by Jen Kingwell.  I've never done a Block of the Month in which everything was sent out month by month, so I thought I'd try it.  It's also supposed to be done entirely by hand, which I will admit here and now that I have not done.  I will hand piece where necessary, for example, in these blocks I did the applique by hand, but otherwise I haven't yet.  I have to admit, I appreciate the sturdiness of machine sewing, it holds up, it's neat and I enjoy it.  Why mess with that, so half the fun of making these blocks for me has been trying to figure out how I will get around having to sew by hand.  The most challenging so far was sewing the drunkard's paths (which are extremely small) by the machine.  I've used quite a bit of foundation piecing to make these as well.

As far as the fabric selection goes, I have substituted out a couple of the Jen Kingwell fabrics out for fabrics from my own stash here and there just to give it the little bit of extra pop of color that I like.  I'm caught up now and anxiously waiting for the next blocks to arrive!

In the meantime, I've been moving at a glacial pace through the easiest of the borders (the checkerboard border) of my Midnight at the Oasis quilt.  I have half of one side finished and I'm determined to make finishing this border my sewing goal for the week.
Posted by Jeannette Bruce at 6:32 AM

your blocks look fantastic! I'm hoping this comes out as a pattern after the BOM is over, so I can make one. I'm presently finishing up my Sweet Beans and Green TV quilt, that was almost all machine stitched except for the applique also. Jen sure has a great pattern making mind

I am really enjoying watching your progress on this project and every time you show it I kick myself for not signing up. I will continue to live this one through you. hugs

Your blocks are gorgeous! I am not much of a hand appliquer. I love the look but it does my head in. I am not good with small pieces of fabric. One day when I have more time on my hands I can see myself doing more applique.

Your blocks are beautiful! I had to laugh at the phrase "glacial pace"--unfortunately that is the speed I work at nearly all the time.

These are such great blocks. I like that you're swapping a few fabrics to give it a bit of your own personality.

Find best Home based Business without any work, just invest and rest with your profit
EarningsClub.com