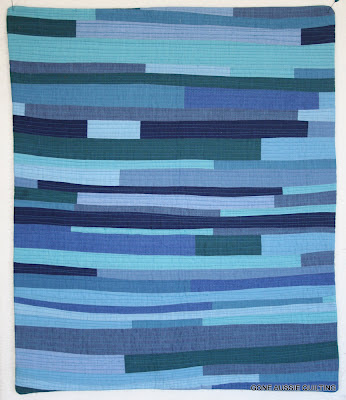 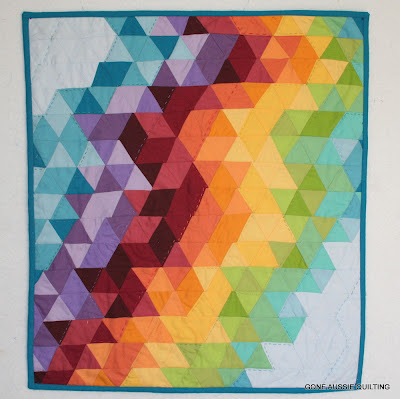 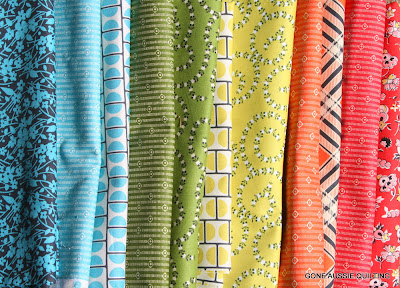 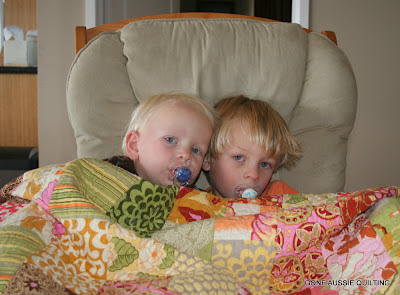 So, just to let you know why I haven't posted this past week it's because we've all come down with the flu.  I've included a photo of the boys sick, miserable and cuddling each other for warmth in the chair.  It's actually been cold enough to light the fire and of course with the colder temperatures comes the seasonal
flu.  Oh well, you get that.  Just hoping that we can manage to avoid the doctor's office.

Anyway, I never posted about what I gave and received in the For the Love of Solids Round Two swap.  For my partner Annabella, who is all about the water and water colors, I made a mini using Oakshott cottons.  I did an art binding on it because I thought a traditional border would take away from its free form.

What I received back was the adorable rainbow mini in the second picture from Katherine.  What was so serendipitous about this was the fact that I had only just recently decided that my New Year's resolution (I decided this in March) was that 2012 would be the year of the rainbow for me.  I didn't ask for rainbows, I just asked that my partner be inspired by nature and she came up with rainbow.  Too funny!

Why did I decide in March that this should be the year of the "rainbow" for me?  Well, it's no secret that where we live has been in drought for many years and that since last year we have finally been seeing the hope at the end of the rainbow.  We've had rain!!  We've seen more rainbows and are very thankful for their presence.  Also, it hasn't only been that.  I do feel that 2012 is a special year, it feels like the end of one era and the beginning of a new one (for me--turning 40 this month!!).  I'm not just talking about the ending of the Mayan calendar.  I'm feeling something in the air, something different ahead of us.  Wasn't the rainbow God's promise to Noah?  I feel like there is something ahead...  I have been seeing rainbows everywhere in quilting these past couple years, but they do seem to be popping up more and more often.  We are moving towards color, towards a bright hope for something...   Not sure what I'm on about, but I can taste it in the air.

So, anyway, my personal New Year's resolution is to make a rainbow quilt for every month of 2012.  I will write a post to show you where I am up to soon.  In the meantime, you can see in the third picture down the fabrics I have picked out for April's rainbow quilt...
Posted by Jeannette Bruce at 5:07 PM

Love the oakshott mini in blues. Just lovely. Hope you are all on the mend. x

Yay for rainbows, I'm embracing them as well this year! Hope you're all feeling better soon

These are both lovely... Hope you all feel better soon!

I saw `my` quilt in the photo and thought, hey someone has copied my/your Oakshott quilt only to then realize it was my quilt! Hope you`re all better soon!