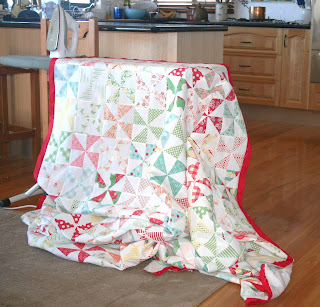 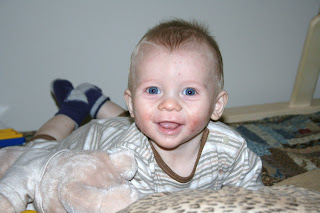 It's been a while since I've posted, but mainly because I just feel too tired all the time. Alexander is doing great, but he does still get me up during the night about 5 times and is pretty high maintenance all day long as well. We were concerned about his weight there for a while, but I really do think that he is fine. He's just so active--really--he moves all day long from morning to night and has just started crawling last week. Not far yet, but he's on the move. He really is such a sweet dear little man, but also highly energetic, curious, aware and easily frustrated! Nearly everyone that has met him has mentioned that I am basically "in for it" once he gets more mobile. He still has continual problems with his skin, mostly eczema, which I try to keep on top of, but is difficult as well. I think that is why he has formed a pattern of waking up so much during the night.

As far as quilting goes, I try to do a little when I can for my own sanity. Sometimes I only get a few minutes a day, but those few minutes are precious and help me get through to the next day. I just finished most of this quilt I have shown here on the ironing board. There is no way I could take a picture of the whole quilt layed out since it is already 100 inches squared and there is yet a final border to go around it as well! Back when Swell by Urban Chiks came out, I bought a fat quarter bundle with the intention of doing a pinwheel only quilt out of the fabrics. Well, I didn't get to it right away and I am glad that I didn't because in the interim period Urban Chiks came out with the sister line Sweet, which I love even more than Swell so I combined the two bundles to make one huge pin wheel quilt. I have been working on this quilt for months and months and am so pleased that I am nearly finished with the top now. I wasn't in love with it as I was working on it either. I felt that there was too much white space with it being 50% Kona Snow, but as soon as I put the red border on it, I fell in love. Go figure. Just shows that so much can change during the design process. Now, I am going to go back and try to get my 1974 quilt top finished as well!
Posted by Jeannette Bruce at 2:49 PM

I just thought I would have a look see if you were back online after such a long time.
Oh Alexandre is a doll. Yes some babies are such movers. My one grandson had a hard time turning night into night. Eventually, it happened and my dil was so happy to be able to get some sleep.
Your quilting is lovely as usual.
I'm glad you are back in blogland.

Yep, I believe you are "in for it" with this busy guy!Can see the exploring bug in his sparkly blue eyes...no worries Heidi, all will be fine :))

Love the quilt, you are right, the red boarder makes this piece beautiful! Good to see you blogging again.